Loved, loved this unknown story of an amazing woman ahead of her time who advanced 2 movements for equality (all from behind the scenes) 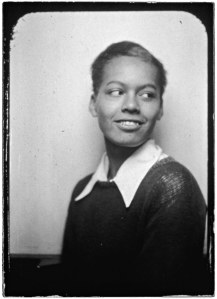 Along the way, she articulated the intellectual foundations of two of the most important social-justice movements of the twentieth century: first, when she made her argument for overturning Plessy, and, later, when she co-wrote a law-review article subsequently used by a rising star at the A.C.L.U.—one Ruth Bader Ginsburg—to convince the Supreme Court that the Equal Protection Clause applies to women.

She was the first African-American to earn a doctorate of jurisprudence at Yale. Her family formed part of a large and close-knit family whose members ranged from Episcopalians to Quakers, impoverished to wealthy, fair-skinned and blue-eyed to dark-skinned and curly-haired.

She taught herself to read by the age of five. She could have easily earned a spot at the North Carolina College for Negroes, but she declined to go, because, to date, her whole life had been constrained by segregation. From the moment Murray understood the system, she actively resisted it. Columbia, she learned, did not accept women. She went to Hunter College and then Howard.

In 1944, Pauli Murray was the only woman among and first in class at Howard University law school. Questioning the “separate but equal” doctrine and in Plessy v. Ferguson, she made a bet with her professor, a man named Spottswood Robinson: ten bucks Plessy would be overturned within twenty-five years. Murray was right. Plessy was overturned in a decade. She argued in her final law-school paper that segregation violated the Thirteenth and Fourteenth Amendments of the United States Constitution. Some years later, when Robinson joined with Thurgood Marshall and others to try to end Jim Crow, he remembered Murray’s paper, presented it to his colleagues—the team that, in 1954, successfully argued Brown v. Board of Education.

Murray wrote an angry letter to F.D.R., accusing him of caring more about Fascism abroad than white supremacy at home. Eleanor responded, unperturbed, and later invited her to tea—the first of countless such visits, and the beginning of a productively contentious, mutually joyful decades-long relationship. Her response to Harvard’s refusal is epic!

“You are not of the sex entitled to be admitted to Harvard Law School.” Murray, outraged, wrote a memorable rejoinder:

Gentlemen, I would gladly change my sex to meet your requirements, but since the way to such change has not been revealed to me, I have no recourse but to appeal to you to change your minds on this subject. Are you to tell me that one is as difficult as the other?

… not even F.D.R.’s intercession persuaded Harvard.

She wasn’t just making a point. She was telling the truth. Although few people knew it during her lifetime, Murray, the passionate advocate for women’s rights, identified as a man: “one of nature’s experiments; a girl who should have been a boy.” That description also helped her make sense of her desires, which she didn’t like to characterize as lesbian.

By leaving her gender identity and romantic history out of her autobiography, Murray necessarily leaves out something else as well: the lifetime of emotional distress they caused. From the time she was nineteen, Murray suffered breakdowns almost annually, some of them culminating in hospitalizations, all of them triggered either by feeling as if she were a man or by having feelings for a woman.

In 1965, frustrated with how little progress she and others were making, she proposed, during a speech in New York, that women organize a march on Washington. In June of 1966, during a conference on women’s rights in Washington, D.C., Murray and a dozen or so others convened in Friedan’s hotel room and launched the National Organization for Women.

She’s been sainted by the Episcopal Church. In classic Murray fashion, the position she sought was officially unavailable to her: the Episcopal Church did not ordain women. For once, though, Murray’s timing was perfect. While she was in divinity school, the Church’s General Convention voted to change that policy, effective January 1, 1977—three weeks after she would complete her course work. On January 8th, in a ceremony in the National Cathedral, Murray became the first African-American woman to be vested as an Episcopal priest.

There was a very fine line in her between ambition and self-sabotage; highly motivated by barriers, she often struggled most after toppling them.

“If anyone should ask a Negro woman in America what has been her greatest achievement,” she wrote in 1970, “her honest answer would be, ‘I survived!’ ”