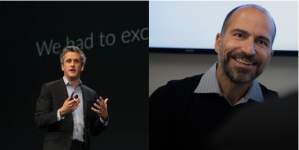 From start-up to scale: Aaron Levie, BOX CEO on McKinsey podcast talks about the #FutureofJobs and #FutureofWork:

You have to be nimble enough, you have to be agile enough, as new information is coming in, to constantly be evolving ie. moving from agile with a capital “A,” or actual hardcore agile software-development methodology, to agile with a small “a,” or agility.

The thing that we’re seeing, which is a pretty interesting trend, is the complementary transformation that’s being driven from the IT technology organization as well as HR and operations. These things are feeding off of each other in a profound way and that we think are going to collude to then ultimately transform how companies will operate, which is that you have to get to smaller teams that move much more rapidly and that have permission to fail but iterate constantly.

The key is to be very, very clear on which business processes you can afford to have this kind of level of iteration, agility, and fail-fast mentality.

Every couple of years, I reread [Christian Clayton M. Christensen’s book Innovator’s Dilemma] as a reminder about, again, how important these moments are when you’re thinking through, is that a competitor that’s coming up behind you, is that an actual disruptive threat, or is more of a sustaining innovation that you’re going to be able to adapt to?

Is there something that you’re not responding to in the market because your organization finds it unattractive to respond to that thing? Or are we just not moving fast enough? These are fundamental decisions that teach you when you are at risk of being disrupted. But then, conversely, are there areas where you can be more disruptive to competition? And how do you take advantage of that? That’s why I think it’s always important to be grounded in the core of Innovator’s Dilemma and why it matters.

Dara Khosrowshahi, Uber’s CEO, on Masters of Scale podcast “How pirates become the navy”, talks with Reid Hoffman about the most extreme pirate-to-navy transition in startup history (early-stage startups are a lot like pirate ships – they need a buccaneering spirit to survive. But every startup needs to evolve into something more akin to a navy – no less heroic, but more disciplined).

“At some point, you have to let go and trust your team to get you there.”

Interesting to read about Dara Khosrowshahi, Uber’s CEO, story in The New Yorker; in particular as his memo to Expedia employees was a masterclass in leadership with emotional intelligence:

“ I have to tell you I am scared. I’ve been here at Expedia for so long that I’ve forgotten what life is like outside this place. But the times of greatest learning for me have been when I’ve been through big changes, or taken on new roles–you have to move out of your comfort zone and develop muscles that you didn’t know you had.”

Unsurprisingly, he plays the role of flatterer, diplomat, negotiator, and salesman, selected by Uber’s board in part because of his personality: agreeable, unthreatening, comfortable with the kind of corporate talk that investors find reassuring. All qualities required as Uber plans to go public in 2019 and grow to between 20 and 30 times its current size. If he meets certain objectives, including taking the company public in 2019 at a valuation of a 120 billion dollars, he is set to make 120 million dollars.

Wow not bad for someone who showed vulnerability and therefore emotional intelligence when joining the firm.

Arianna Huffington, the only woman on Uber’s board, was the one announcing he was chosen (amongst Jeffrey Immelt, a former C.E.O. of General Electric, and Meg Whitman, the C.E.O. of Hewlett-Packard, both celebrity chief executives)

Darren K. (after he got tired of hearing people mispronounce his name) often speaks of his experience finding asylum in America after his family fled Iran, in 1978:

“There’s this chip you have on your shoulder as an immigrant that drives you.”

One of his first acts as C.E.O. was to create a new list of cultural values. No. 4 now reads

“We Do the Right Thing. Period.”