Since I wrote about Tech for good (or maybe not so much) in April, I’ve gained (more) faith in humanity with elevated thoughts and initiatives recently, from Kasparov who’s 55 and Emma Yang who’s only 14.

The Future of Everything Festival: Garry Kasparov on AI Making Us Free

The WSJ’s podcast “The Future of Everything“ is my new favourite thing.

Their Future of Everything Festival in NYC in May has been a succession of inspiring panels and discussions. 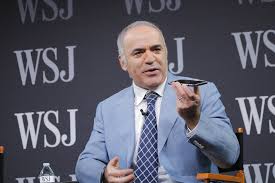 The session with Garry Kasparov on AI resonated the most with me (who best than the former chess champion defeated by Deep Blue 20 years ago) as he redefines AI as Augmented Intelligence – like Melanie Cook at SXSW 2017Augmented AI session.

The discussion left me with hope: Kasparov pointing out that thankfully even if machines will do more and more eg. 95%, we still have 5% to define the framework, to

In a nutshell, human-machine collaboration is the future. He sums it up as embracing our humanity and

“our uniqueness, our ability to make choices that sometimes may contradict the odds that will be the most important elements of human-machine collaboration”

His thoughts are actually perfectly summed up in the title of his book “Deep Thinking: Where Machine Intelligence Ends and Human Creativity Begins”

Kasparov’s view on AI is also summarised in a16z podcast Not If, But How — When Technology is Inevitable (with Kevin Kelly) from June 2016. At 26’19, Kelly quotes Kasparov saying when he lost against Deep Blue that if humans had access to the entire database of every move in chess games, he’d have won. So he made a new chess league where you can play with computers and:

“those combinations a human + an AI is called a Centaur and in recent years, every single world chess champion has been not a human, not an AI, but a human + an AI. And that’s where the Go [game] is going into the same direction”

Which is exactly what Simon James highlighted at SXSW 2017 on his talk about Building a Cognitive Business.

My (regained) faith in humanity is also linked to Stuart Russel’s 3 principles for creating safer AI:

And of course this: 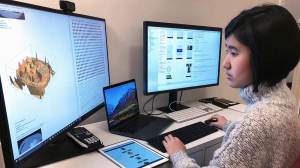 I couldn’t believe that a young 14-year old girl started coding an app to help her grandmother’s memory with Alzheimer.

They always say that when the disease starts, you have to train the brain to remember everyday objects – even through post-it notes.

Taking it to a new level thanks to technology to help patients recognise loved ones photos (or take a picture and automatically identify them if they don’t recognise them) makes total sense.

I’m just amazed that such a young girl initiated this whole new level of early-stage memory strengthening for Alzeihmer’s patients.

Listen to Emma Yang’s story and inspiration on this podcast. I so relate to how close to her grandmother she is.